When it was finished in 1783, it covered about 27 acres of land and partly encircled the city of San Juan. Entry to the city was sealed by San Cristóbal's double gates. After close to a hundred years of relative peace in the area, part of the fortification (about a third) was demolished in 1897 to help ease the flow of traffic in and out of the walled city. This fortress was built on a hill originally known as the Cerro de la Horca or the Cerro del Quemadero, changed to Cerro de San Cristóbal in celebration of the Spanish victories ejecting English and Dutch interlopers from the island of this name in the Lesser Antilles. At the time, it formed part of the insular territorial glacis of Puerto Rico. Castillo de San Cristóbal also contains five cisterns that were used for the storage of water during the ages of the Spanish Colony. They are extremely large (24 ft tall, 17 ft wide and 57 ft long) and were used as bomb shelters during World War II. 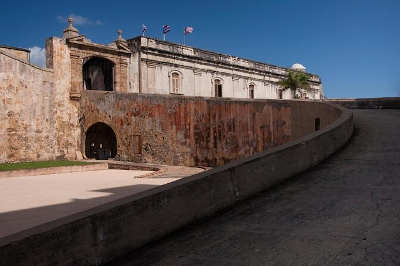